To answer questions about vaccination, France Télévisions offered its first live broadcast on Twitch on January 22nd, in the company of Samuel Etienne and Doctor Damien Mascret. A feedback by Eléonore Gay, Deputy Editorial Director, who was at the heart of the event

For the first live broadcast of France Télévisions' news, the choice fell on an exchange around vaccines and Covid-19 on Twitch, the platform "that rises", based on live broadcasts and interactivity. On Friday 22 January 2021, starting at 9.30 am, and for two hours and fourteen minutes, platform users were invited to ask all their questions to Doctor Damien Mascret, a doctor and health journalist at France Télévisions, during a live "#OnVousRépond sur les vaccins" on the Twitch FranceTV channel. Samuel Etienne, journalist, host, and recently streamer on Twitch, hosted the live show.

France Télévisions had tested Twitch for a Telethon gaming operation on its own channel, FranceTV, in 2019. In September 2020, the political programme Vous avez la parole had formed a partnership with the journalist Jean Massiet for a programme on the Twitch channel of the streamer. The live #OnVousRépond on vaccines is a first for the editorial staff, with a project totally thought out and carried out in-house.

Why it is a success?

In the light of the positive feedback, both in terms of editorial quality and audience, this first trial is promising. The personalities of the speakers have a key role to play: Samuel Etienne is a figure of the platform, his personality is acclaimed. Damien Mascret very quickly managed to integrate the codes of the exercise: expertise, humility, humour. He was renamed "Dr Tuiche" by users, a nod to his accent from the Northern region of France. The two journalists created a climate conducive to exchanges, with a demand for editorial quality, and by taking their time. Secondly, the editorial content and the quality of the expertise clearly meet a demand from the audience. On Twitch, we have done what we know how to do, as journalists, by borrowing from the platform's codes. The live and interactive nature, the length of the chat, the very human character of our journalists, have created a bond of intimacy, of benevolence, with the community, reinforcing the image of a public service that listens, that is legitimate, trustworthy - and modern.

From idea to implementation

At the national newsroom, the link with our audiences is at the heart of our reflection. Question/answer formats exist on social networks, and chats are regularly organised on franceinfo.fr with our expert journalists. The #OnVousRépond system, first launched on the web last March, was quickly extended to television news programmes and the news channel.

I proposed to Laurent Guimier, news director of France Télévisions, a live broadcast on vaccines with Damien Mascret, on Twitch, at the end of December. He suggested I talk to Samuel Etienne about it. In January, once the process was underway, it took us less than two weeks to set up the system, in commando mode, with a team of twelve collaborators, from the Innovation department, with the digital and editorial staff. In videoconferencing and via email loops, all the questions were addressed and solutions were found as we went along, with great reactivity. This is how we validated the editorial choices, the moderation system, and the means to implement the hypotheses retained.

The idea: a setup that does not respond to the codes of the classic TV, more informal. The two speakers are seated around a table, in front of a green screen. On the green screen, images from outside, filmed from the premises of France Télévisions, are broadcast. The microphones are visible, it is a choice. The dressing meets the codes of the stream. Damien Mascret draws on a tablet, whose image can be inlaid on the air. The realisation is basic: there are only two plan values. One wide shot with the two speakers, or two tight shots. The studio used is located at EOS, it has two cameras and a Tricaster production system. For this first, the Innovation teams were at the controls and were able to propose inventive and efficient technical solutions. 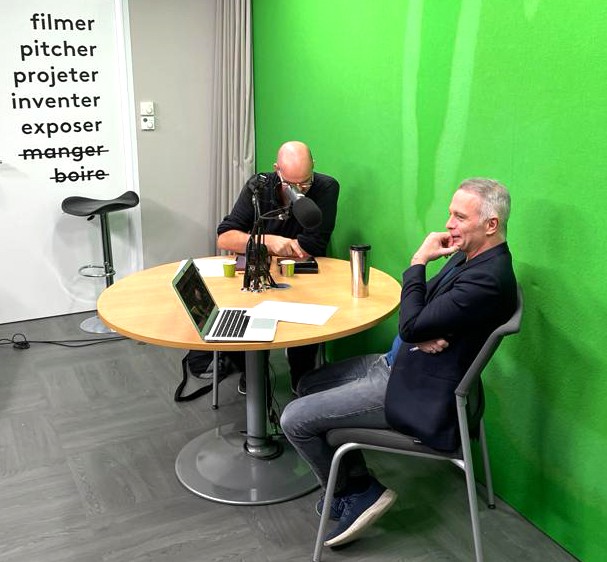 To watch the replay : https://www.twitch.tv/francetv

Age of the participants

The platform does not communicate data about its subscribers, but the Twitch audience is young, rather male.

It allows live surveys to be launched among the chat participants. During the live chat, a survey was carried out at 10.45 am (8811 responses), with the question: "How old are you? "The viewers had 2 minutes to answer

Age composition of the audience

Some messages from the chat

Fuziion_rl : This show is incredible

Ddmeg01: A nice discussion with a specialist, without timing constraints, and participatory.

Rodybecks95: next guest Olivier Véran and that he speaks without filter, can you do that?

Ev0xilon : @francetv I hope you're preparing new shows on Twitch given the success

Kargnokk: First time that TV has a good approach to the internet world! Thank you!

The team behind the program