WEI OR DIE is a new kind of fiction, immersive and interactive, which places the Internet user at the heart of a weekend of integration that turns into a drama.

Welcome to the hell of a weekend of integration

A film by Simon Bouisson and co-written with Olivier Demangel.

During a WEI, a business school integration weekend, the body of a young man is found drowned on the edge of a pond.

Called to the scene, police officers question the participants and are faced with stories that are too contradictory to accept the theory of the accident. They then decide to capture all the images filmed by the students to lift the shadows and understand what happened.

18 hours earlier. The students come to celebrate their WEI in a large cottage in the countryside. Already subject to the authority of the second years, they have to learn the relationships of power, domination and derision that will run throughout their schooling.

As the day progresses, the activities become more and more trashy and the gap widens between those who join and those who do not join WEI. The alcohol, bickering, and the gradual intensity of the party cause the spirits to warm up and the group to lose its footing. 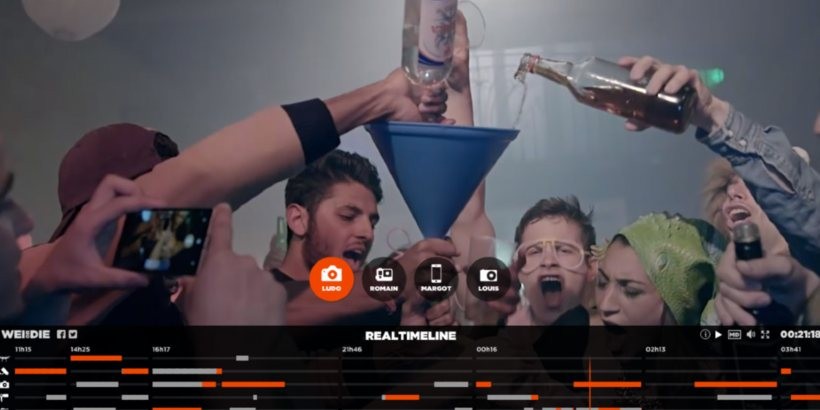 Seized by the police, all the images filmed by the students during WEI are resynchronized and arranged on a global timeline: the REALTIMELINE. These images are the only visual supports available, identified by the camera buttons.

Thanks to these buttons, the user can choose what to watch and switch from one camera to another in real time.

The REALTIMELINE as well as the available cameras can be accessed with the mouse but also with the keyboard, for an optimized navigation.

The user can access the REALTIMELINE at any time to see its progress and navigate freely through the film by clicking on the segments.

He is the organizer of the WEI, overexcited and omnipresent. The kind of person who says that he was hazed in freshman year because he wanted to have the pleasure of pledge a triple for his "darling little pledges".

A joker in first grade, he has "ric-rac" grades but great intuition. He has no limits and is willing to do anything to get others to admire him. His goal: to become the boss of WEI.

First year, a good student, diligent and studious, he put all his efforts into his studies. He's here to "play the game" and to try to fit in by participating in WEI activities. And it's not without difficulty! On the spot, he meets Leïla, his female counterpart.

Her father is listed on the CAC 40, which gives him a certain added value in the eyes of others. His objective: to integrate the SCAPA, a very closed circle that will allow him to develop his network and meet important people.

The most beautiful girl in WEI, and she knows it. Her beauty has always been an asset, but she has more often experienced it as a handicap. The object of all fantasies, she manages to make a place for herself among the pledges.

She's not the type to open up easily. Serious and passionate about images, she films everything. Her camera will have a front row seat for WEI's buzzwords: "sex, drugs, alcohol, violence, humiliation".

Simon Bouisson is a French author-director.

Graduate of the Femis, he realized :

WEI OR DIE is his first interactive feature film (francetv).

You can also discover one of Simon Buisson's last works:  RÉPUBLIQUE